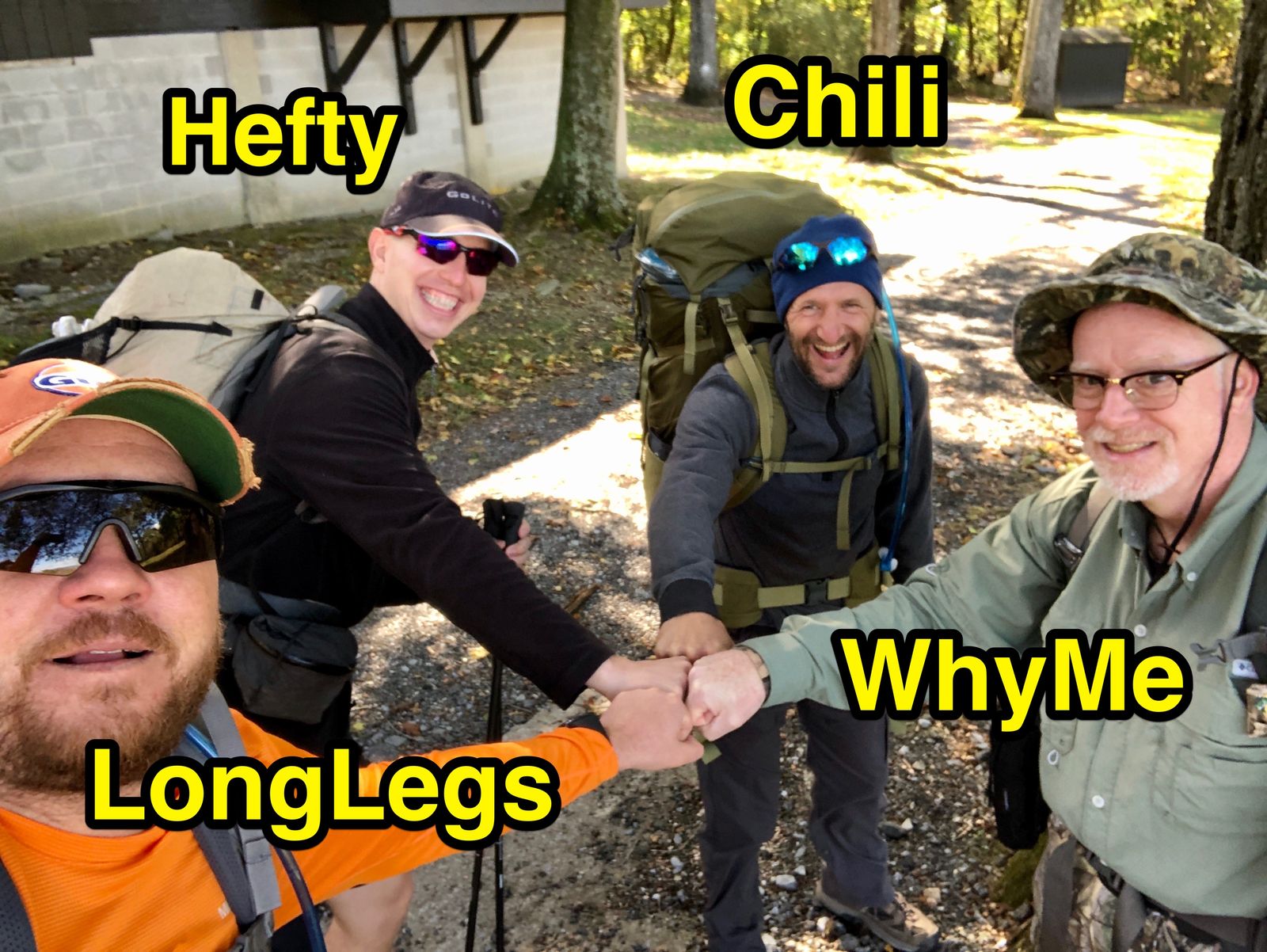 It was the early morning of October 27th, 2019. It’s been raining hard all night and the thought of getting out of my sleeping bag and packing up my tent in a pouring rain did not make me happy. It was the last day of our 5-day section hike of the Appalachian Trail in Maryland, a section of 40 miles of rocky terrain that proved to be challenging and exciting adventure for our team.
I made coffee in the vestibule of my tent, as the rain relentlessly continued on, without a hint of letting up. It was the sound of inevitability: in a few more minutes I would have to pack up my gear and get outside in the pouring rain to pack up my tent and start the hike to Harpers Ferry, WV - our terminus. I tried not to think about that while sipping my coffee. Instead, I thought about the first day of our adventure... 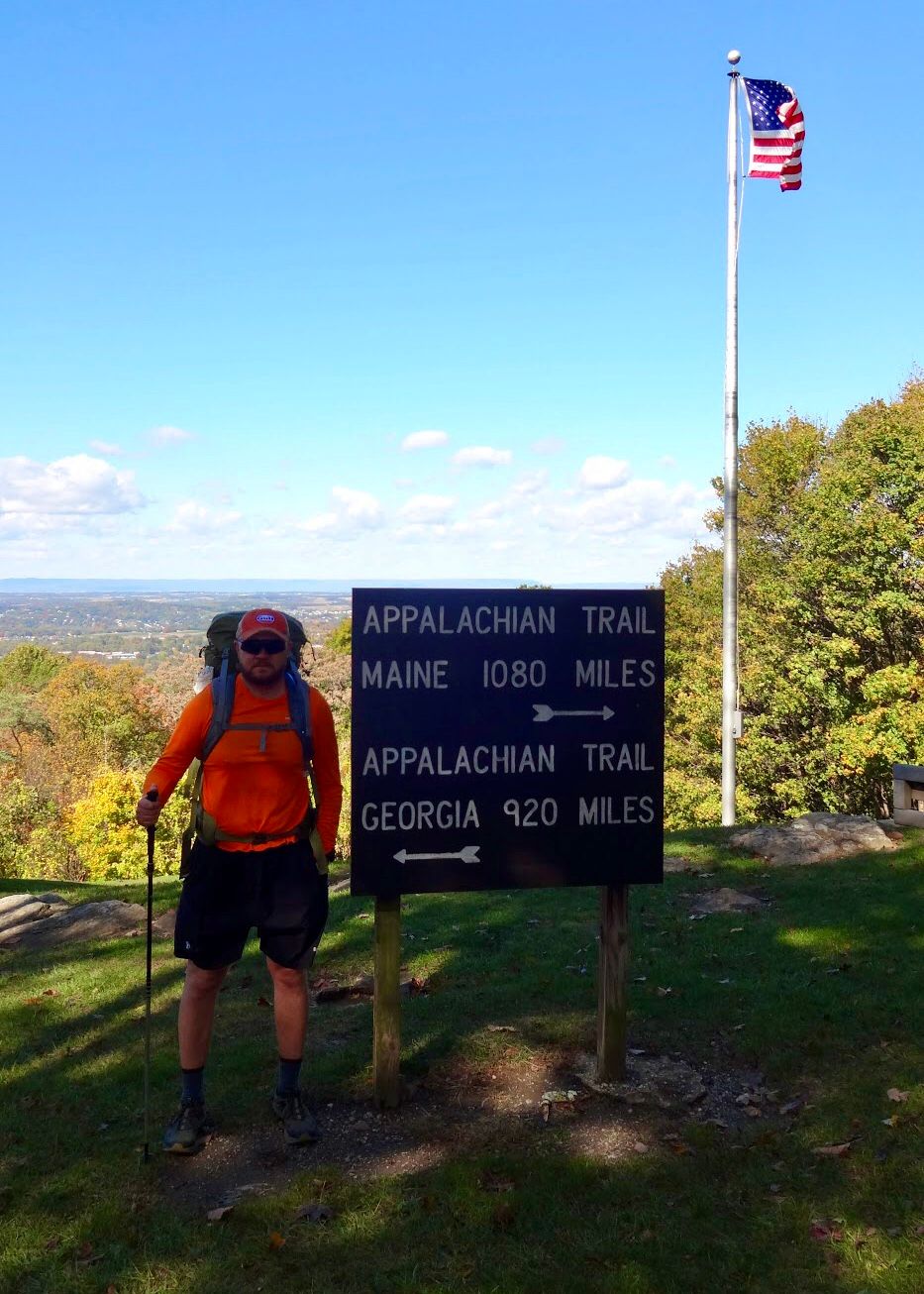 A sunny, clear and crisp weather was welcoming, as I looked out the window of our shuttle ride to Pen Mar, MD. "What is it that makes people want to hike the mountains?" I thought. This questions has been asked and answered a thousand times. For the four characters in this story - it was about braving the elements, enjoying the beauty of nature, camaraderie of like-minded people, and the desire to take on a challenge. On the way to our starting point, Laura - our shuttle guru - shared her life adventures. It was a fun ride. Not sure if that's a thing, but we laughed pretty hard when she mentioned the term "infrared poop". I won't go into detail of what it's about, however, if anybody heard of this, drop a comment below.
My thoughts of nice weather on our first day were interrupted by Chili who came to my tent to remind me that it was time to move out.
I hope this story, reference links to gear, prep posts, and photos will be helpful to those who are thinking about doing some hiking in the mountains; those who have done it may find this a story they could relate to; and above all - this is a document of our journey of living on the trail for five days with a goal of finishing our trip without an accident or worse. 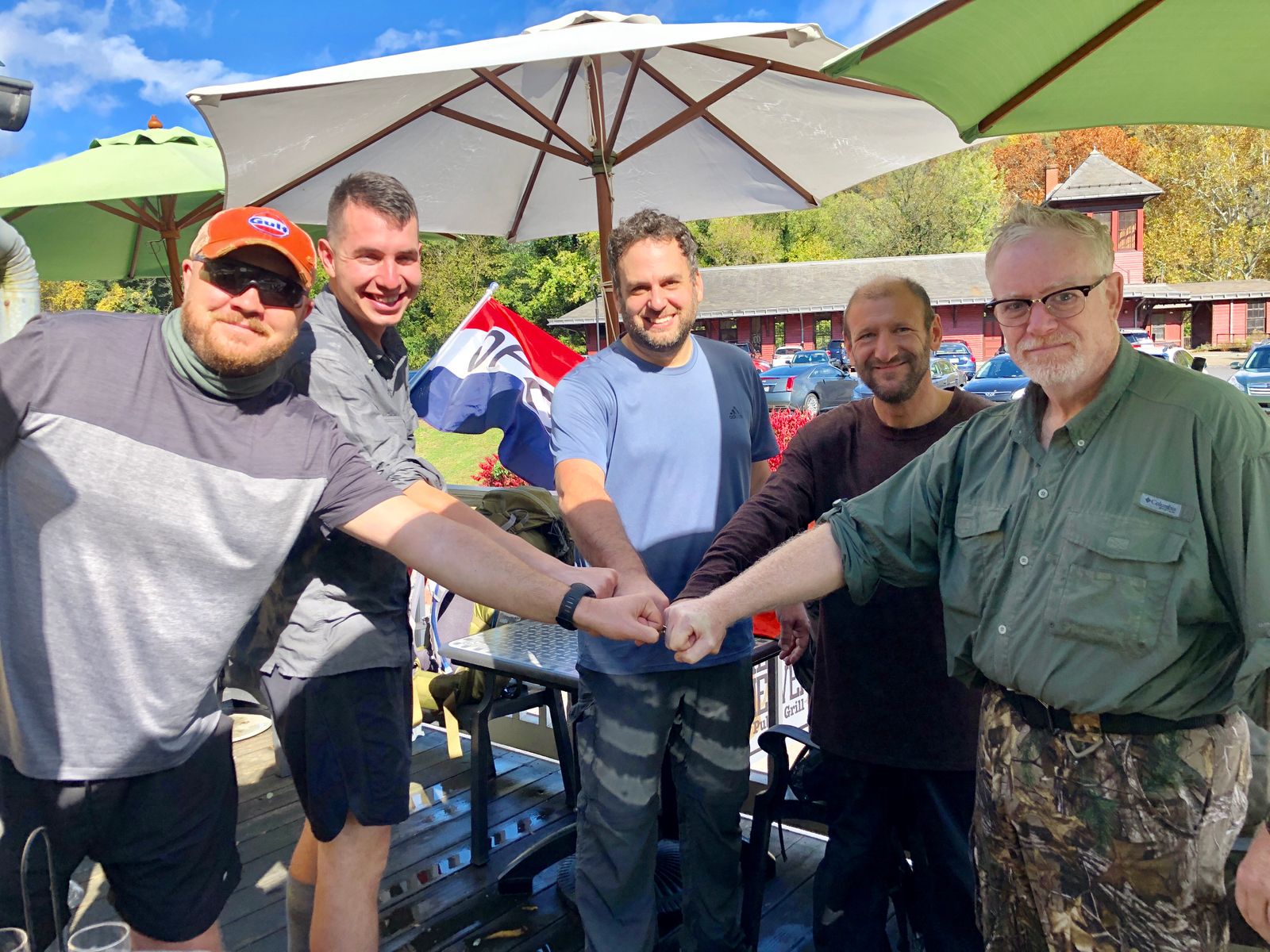 More photos from this trip:
https://drive.google.com/drive/folders/1-4nqAnXcS84hyrVPq9EKqm6JKBofMjXB
Our crew on this trip was the four amigos: Dan - oldest of the group, is a freelance photographer and a former college professor, Alex - is my friend of 20+ years from my days in Philly, currently living in New Jersey and working for FAA, Victor - the youngest in the group, an adventure-seeker, who I only met couple of years ago, a soon-to-be former Navy guy, and myself - a national security public servant of 17 years. As it is customary on the AT, after the first day, we gave each other trail names. Dan became WhyMe, Alex - Chili, Victor - Hefty, and I was given a trail name of LongLegs. We started with four in our group, and by the time we finished our section hike - we were five. Read on to find out why.
Read about one of our training trips:
http://sergestuart.com/post/trip-to-patapsco-to-prep-for-my-appalachian-trail-md-section-hike-plus-gear-i-will-run
In preparation for this trip we conducted several training hikes and camping trips, went over our gear, and came up with a plan. The idea was simple: hike the Maryland section of the Appalachian Trail in 5 days; some 40 miles up and down a mountain, certainly possible and doable in 5 days.
How we planned this trip:
http://sergestuart.com/post/appalachian-trail-md-section-hike-23-27-october-2019
On Day 1 we started near the border between Pennsylvania and Maryland, in Pen Mar. This section of the trail is very rocky, so we had to do a lot of rock scrambling, while climbing up and down the mountain. This is where we got our first taste of what this adventure was going to be like. Luckily, our plan for Day 1 was only to hike 6 miles to our first camp - Raven Rocks.
We set up camp. Myself, Chili, and Hefty set up tents, and WhyMe decided to stay in a shelter. We went to the creek to get water which we filtered of course. Chili turned out to be a master fire starter, getting the fire going very quickly. Some nice people left some wood near the shelter so we had the wood to get us going. We made our dinners and sat around the fire. We were not tired yet, so we took in the sights and sounds on our first day. 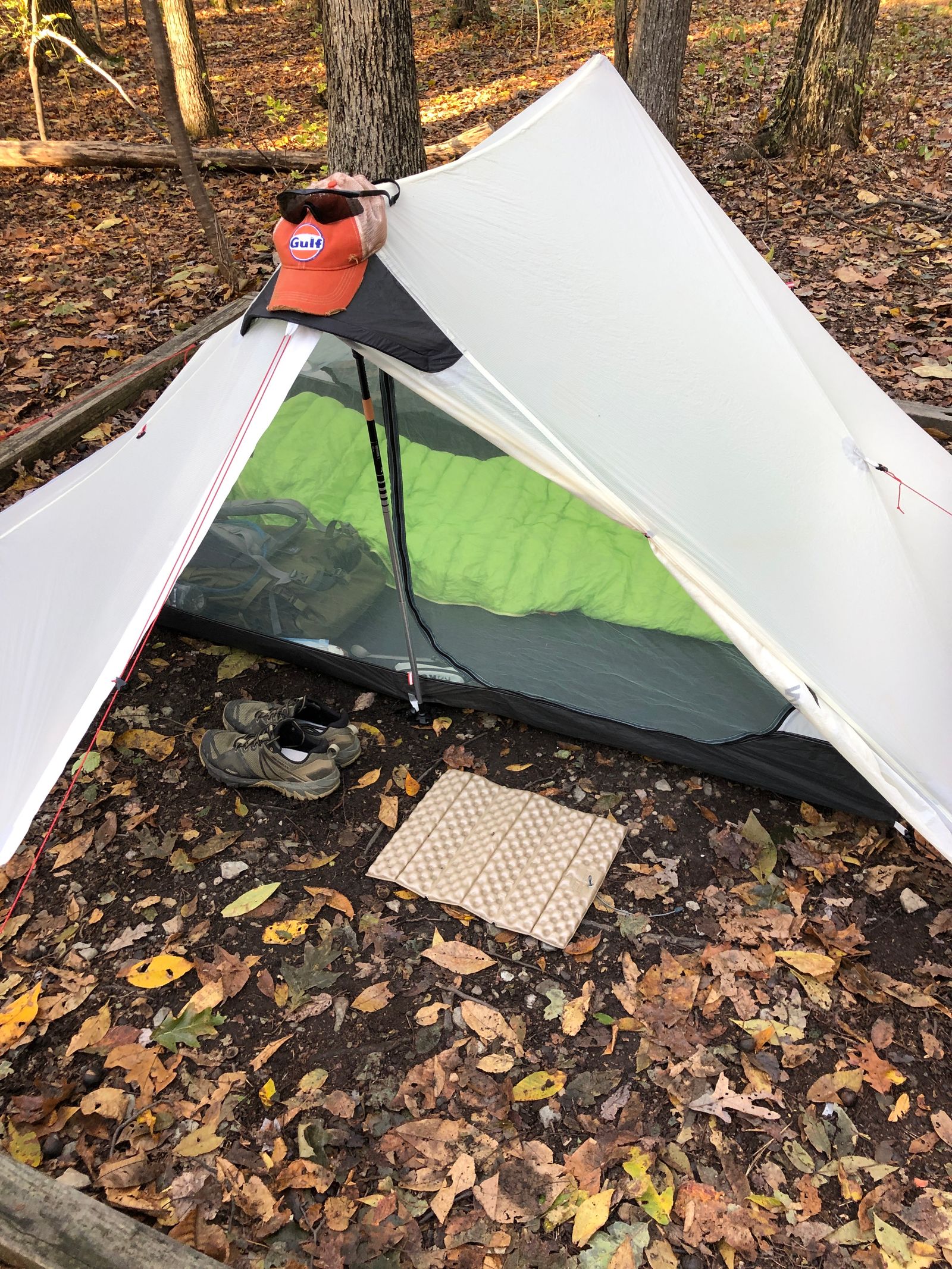 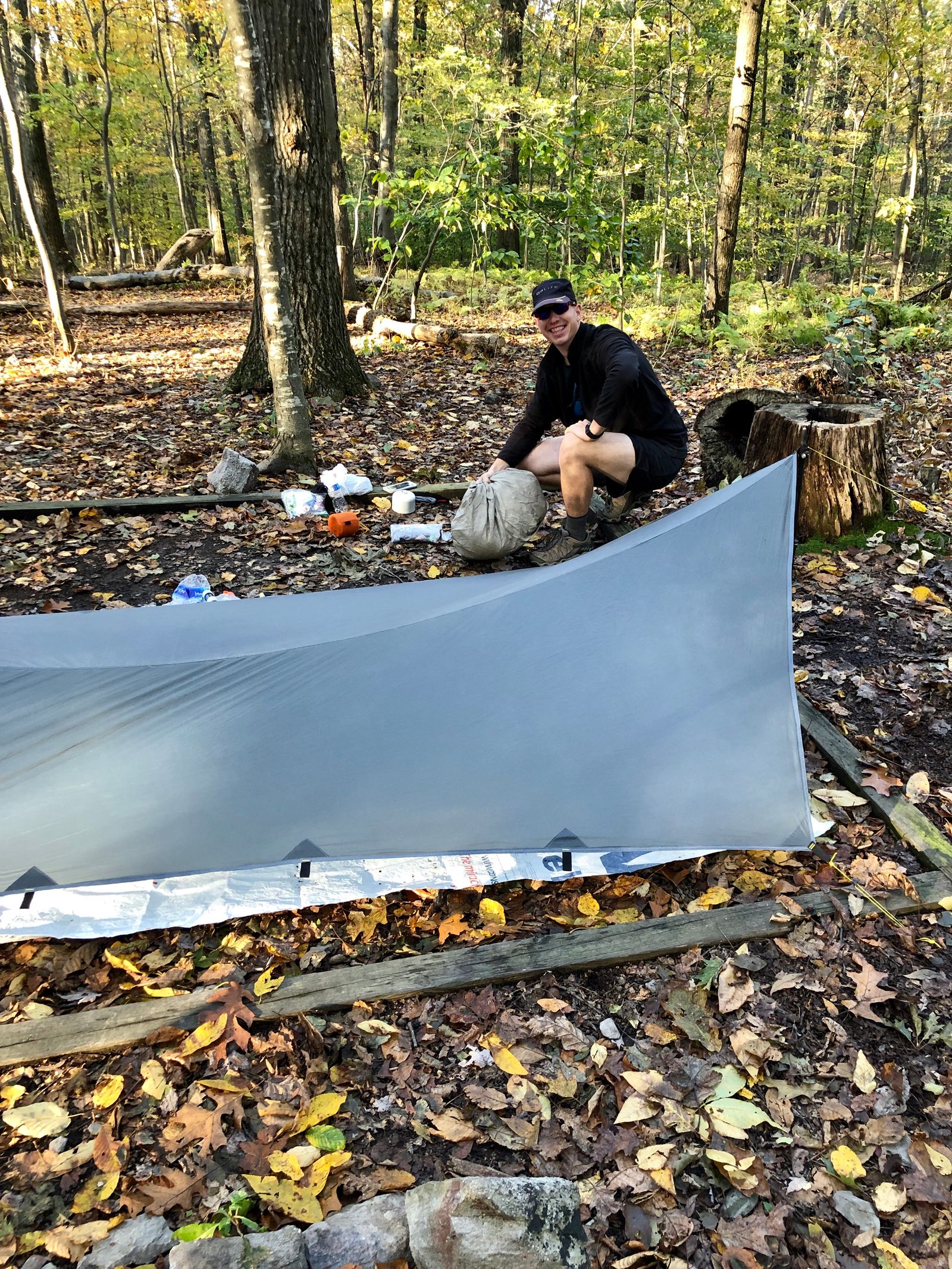 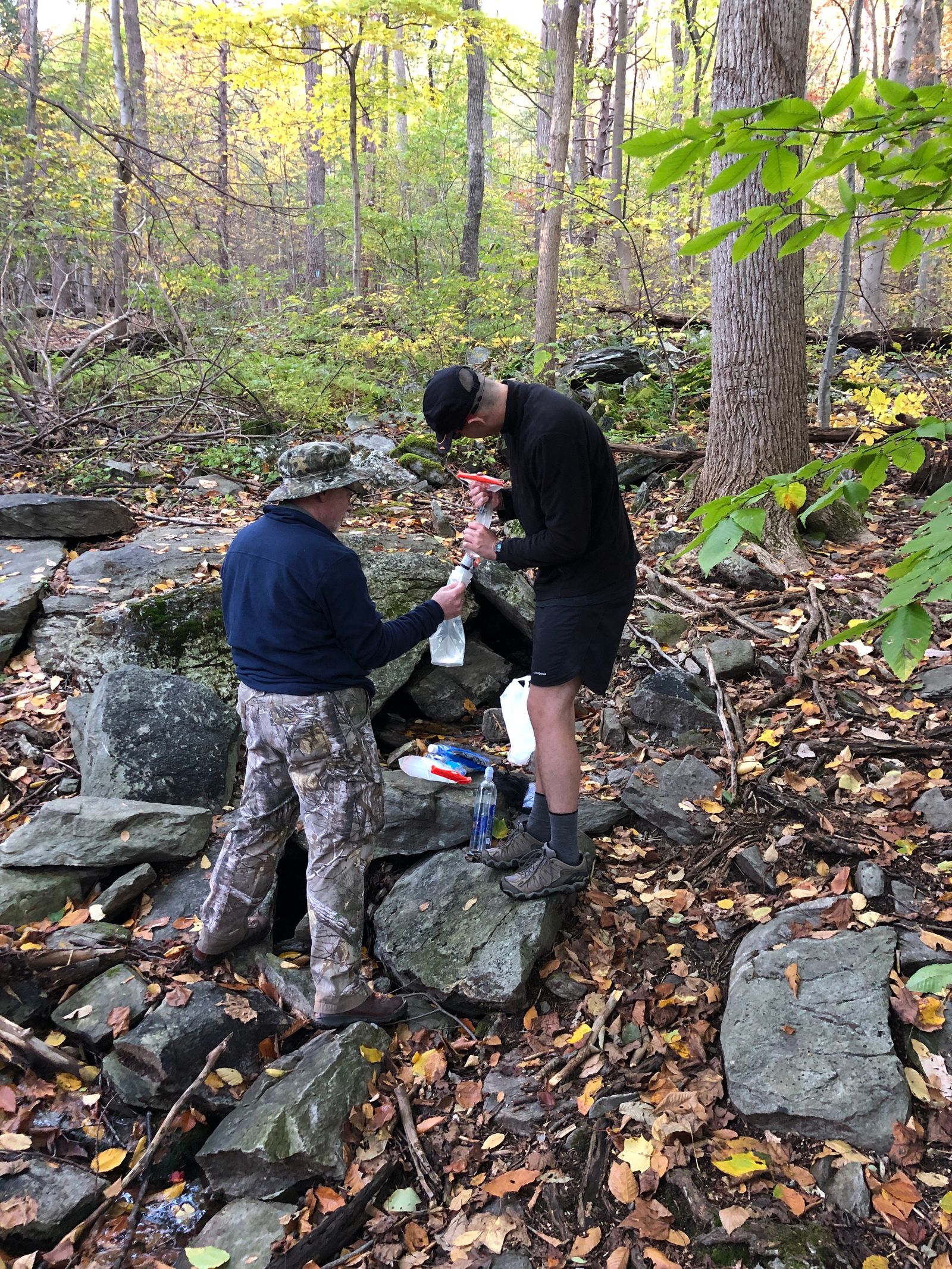 Later on, after it got dark, another group showed up at camp and set up their 2 tents. They were going to the same destination - Harpers Ferry, although we never saw them again.
The first night was uneventful. Sleeping in the woods is a different experience that I enjoy tremendously, even though I toss and turn trying to get comfortable and wake up in the middle of the night to go to pee. I enjoy being inside my tent; it’s like a little home. I started bringing a luxury item on my trips - a tent light. It’s an LED light that I put yellow film over to make the light warm and welcoming. With a battery life of 50 hours, I enjoyed having that light on inside the tent as it got dark, even if I wasn’t in the tent. 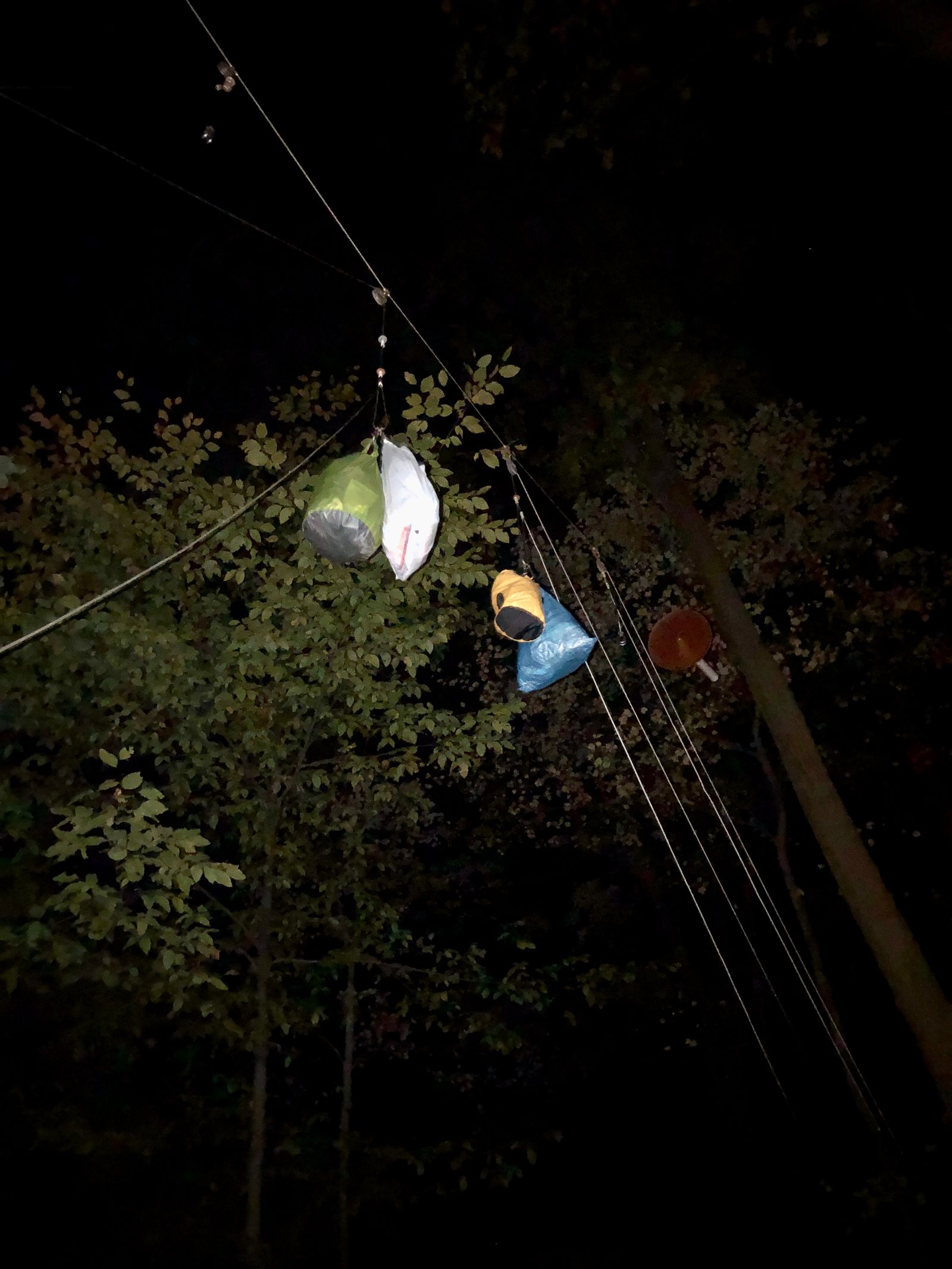 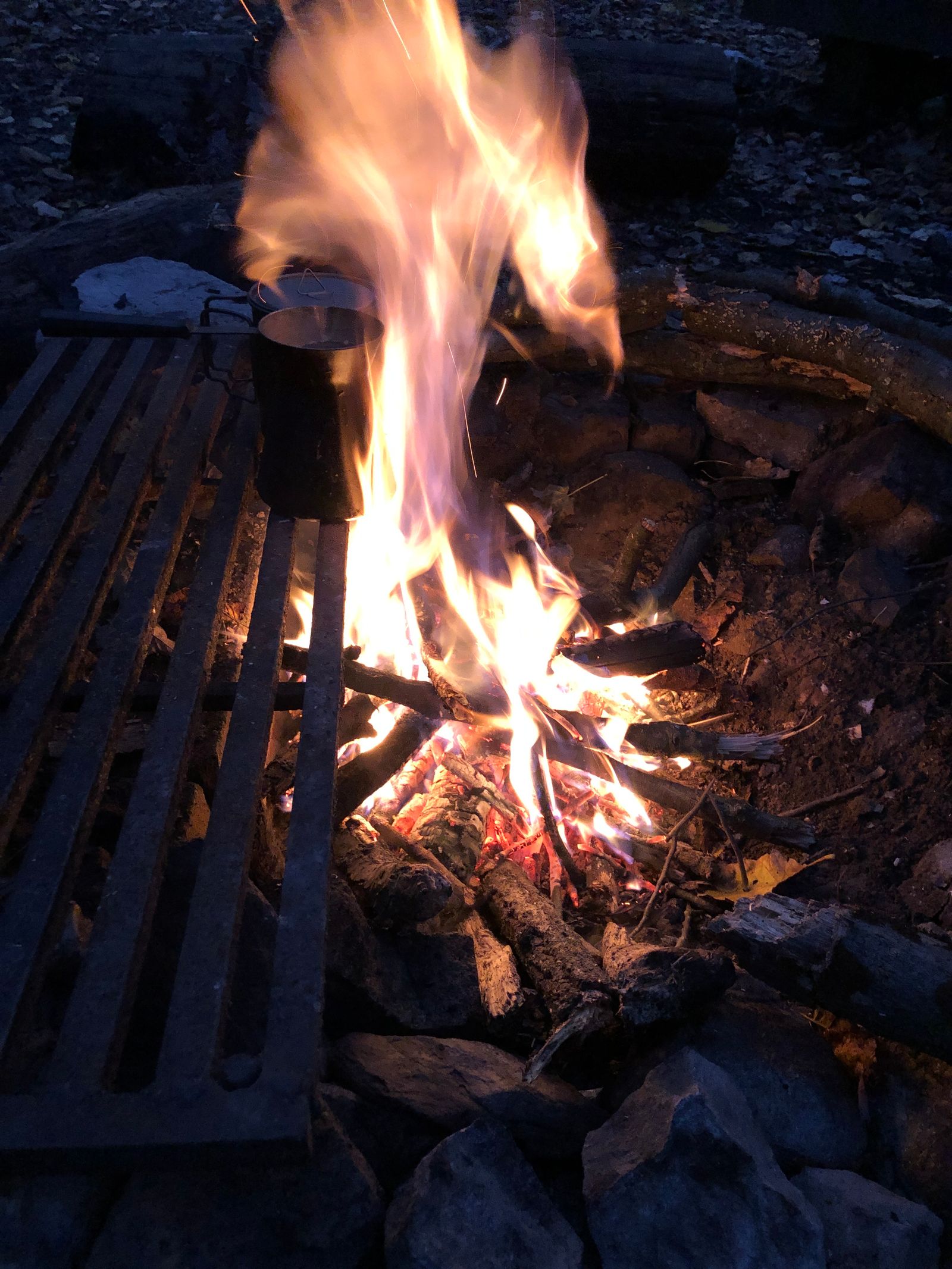 Waking up around 5am, I made my coffee on the stove, ate a granola bar, and sat around for an hour until waking up the crew. I enjoy this quiet personal time to start the day. For Day 2 we planned about 10 mile hike to Annapolis Rock - a scenic overlook on top of the mountain. WhyMe and I have been to this spot couple of months before on our short weekend trip, so we wanted to watch the sunset when we got there.
10 miles is a short trip by thru-hikers standards, but considering this was our first multi-day trip, and the fact that the rocky terrain proved to be more challenging than anticipated, it took us a bit of time to get to Annapolis Rock. Additionally, I miscalculated our miles a bit, using the data for AT, so we ended up doing 11 miles. 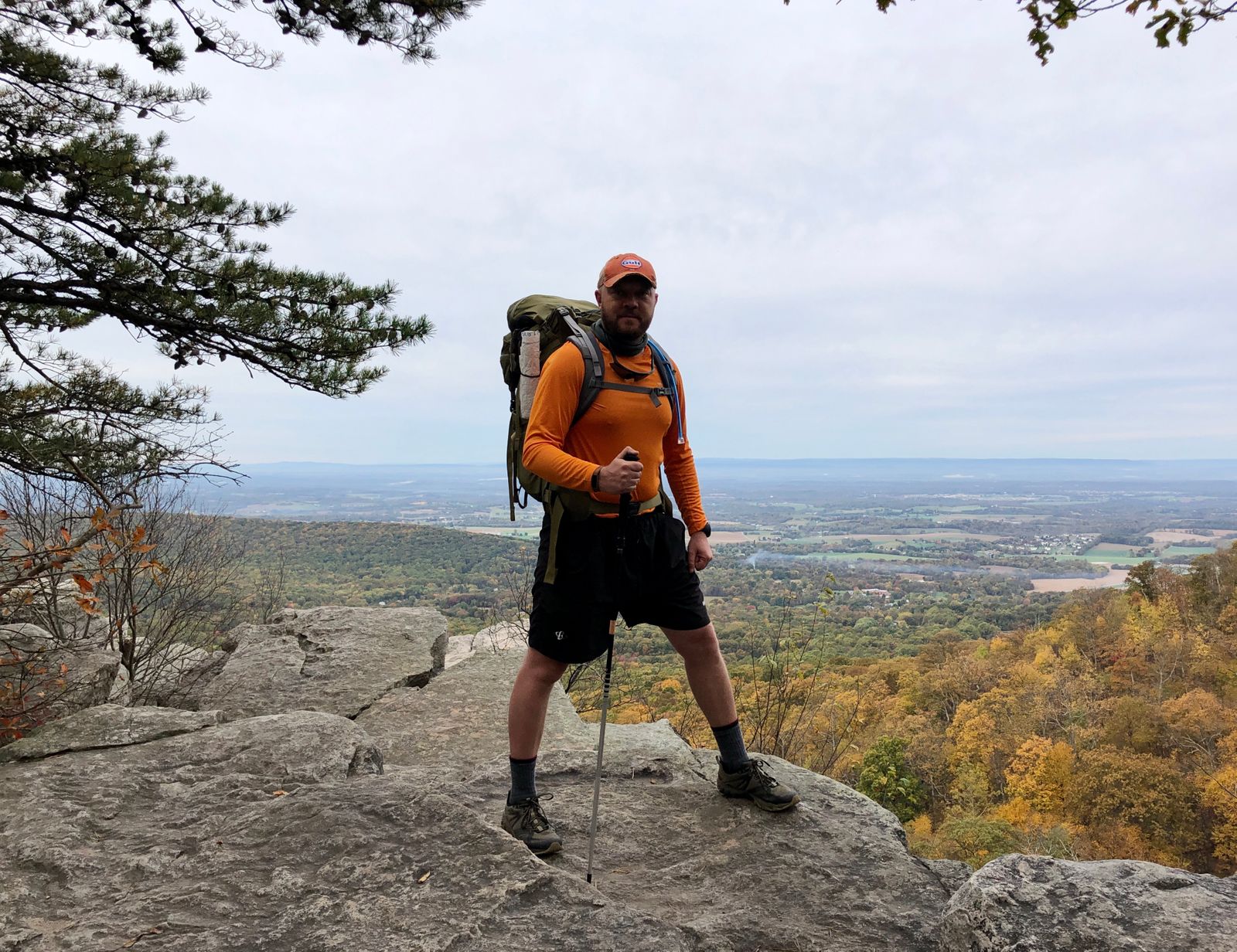 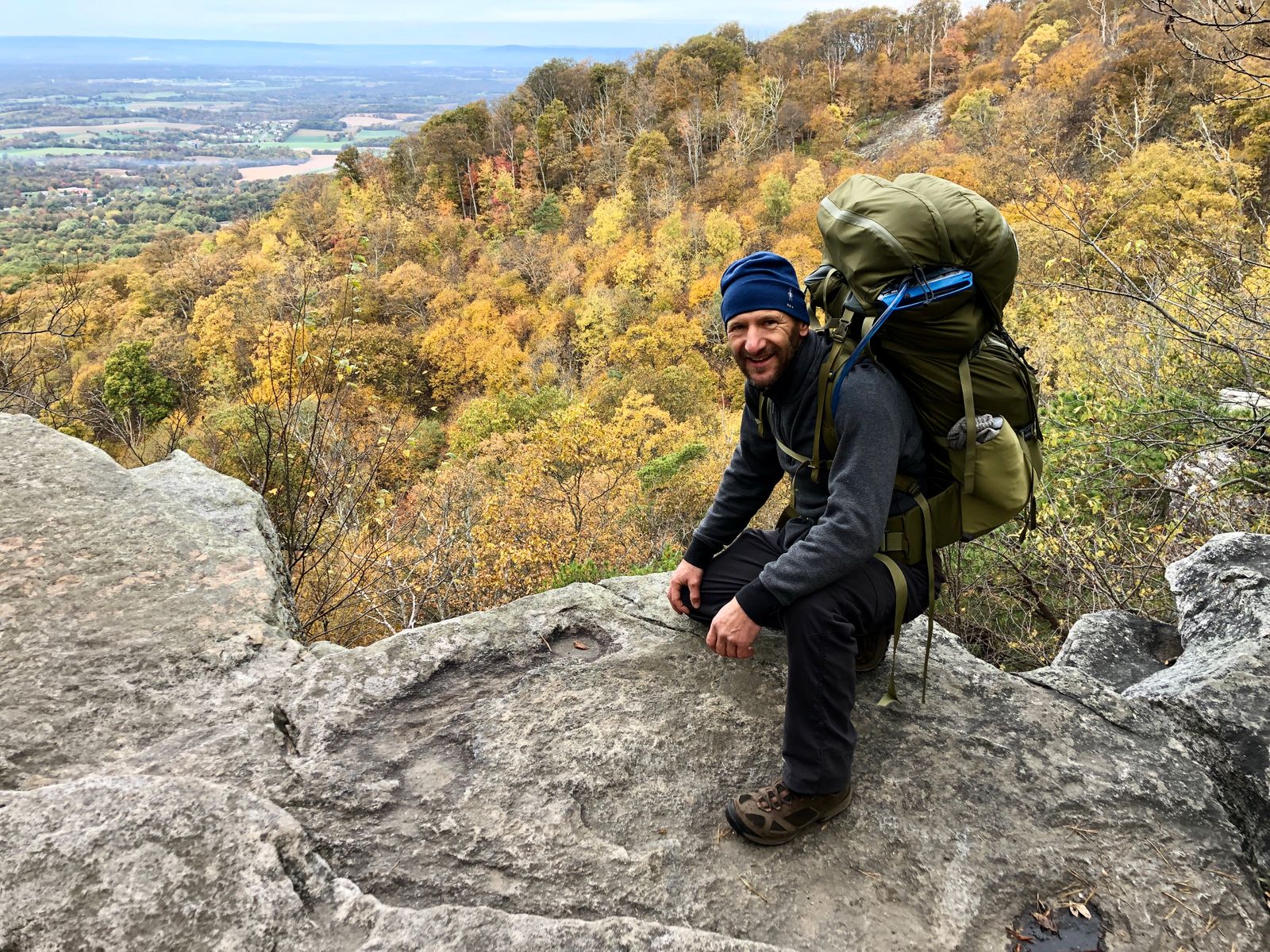 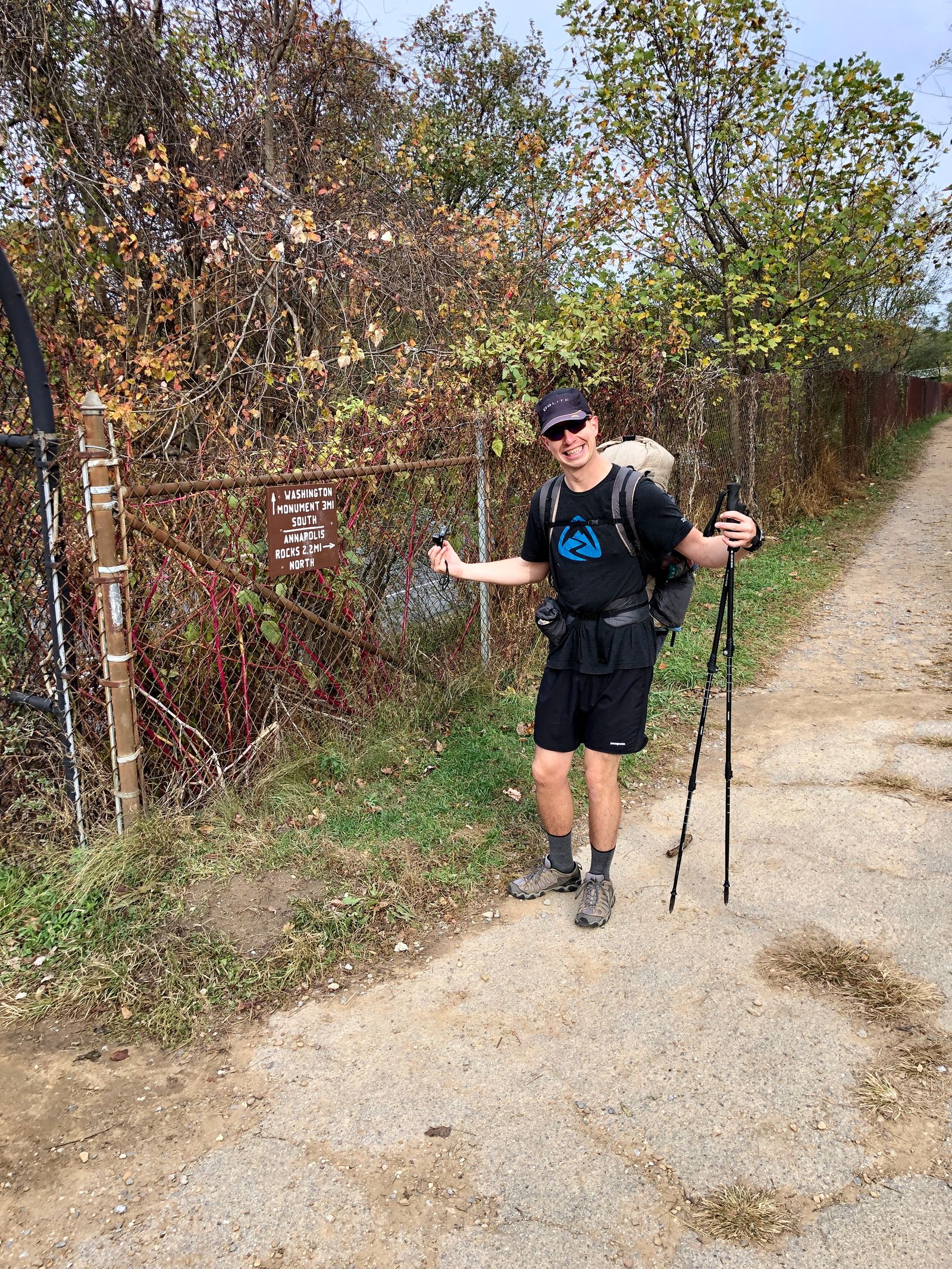 We were tired getting to Annapolis Rock and spent the time we were going to use to see the sunset on setting up our camp. We figured - we’ll see the view in the morning.
That night was uneventful, and since we could not have a camp fire at Annapolis Rock, we went to sleep pretty early. I did see a small copperhead snake though near camp. 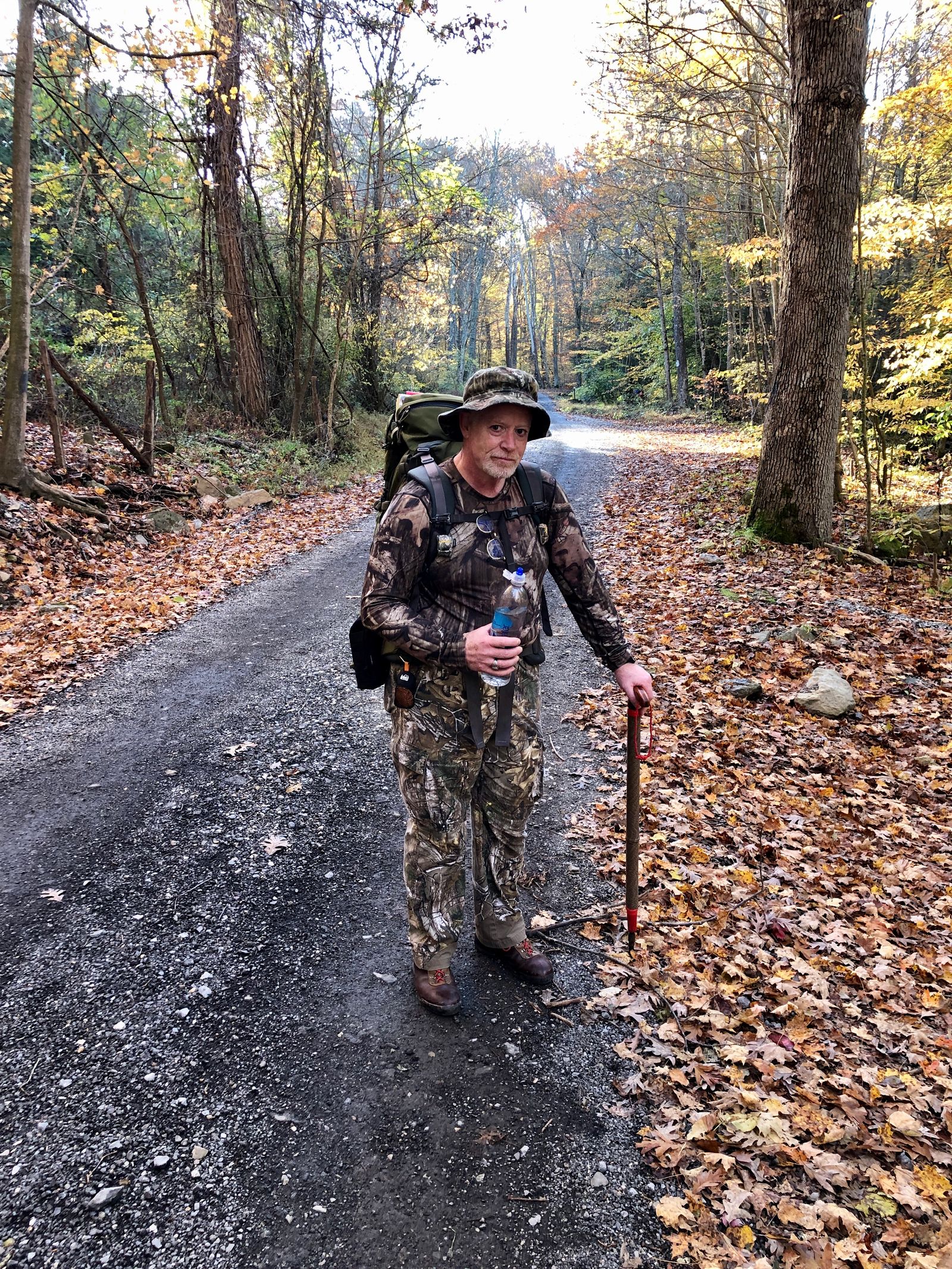 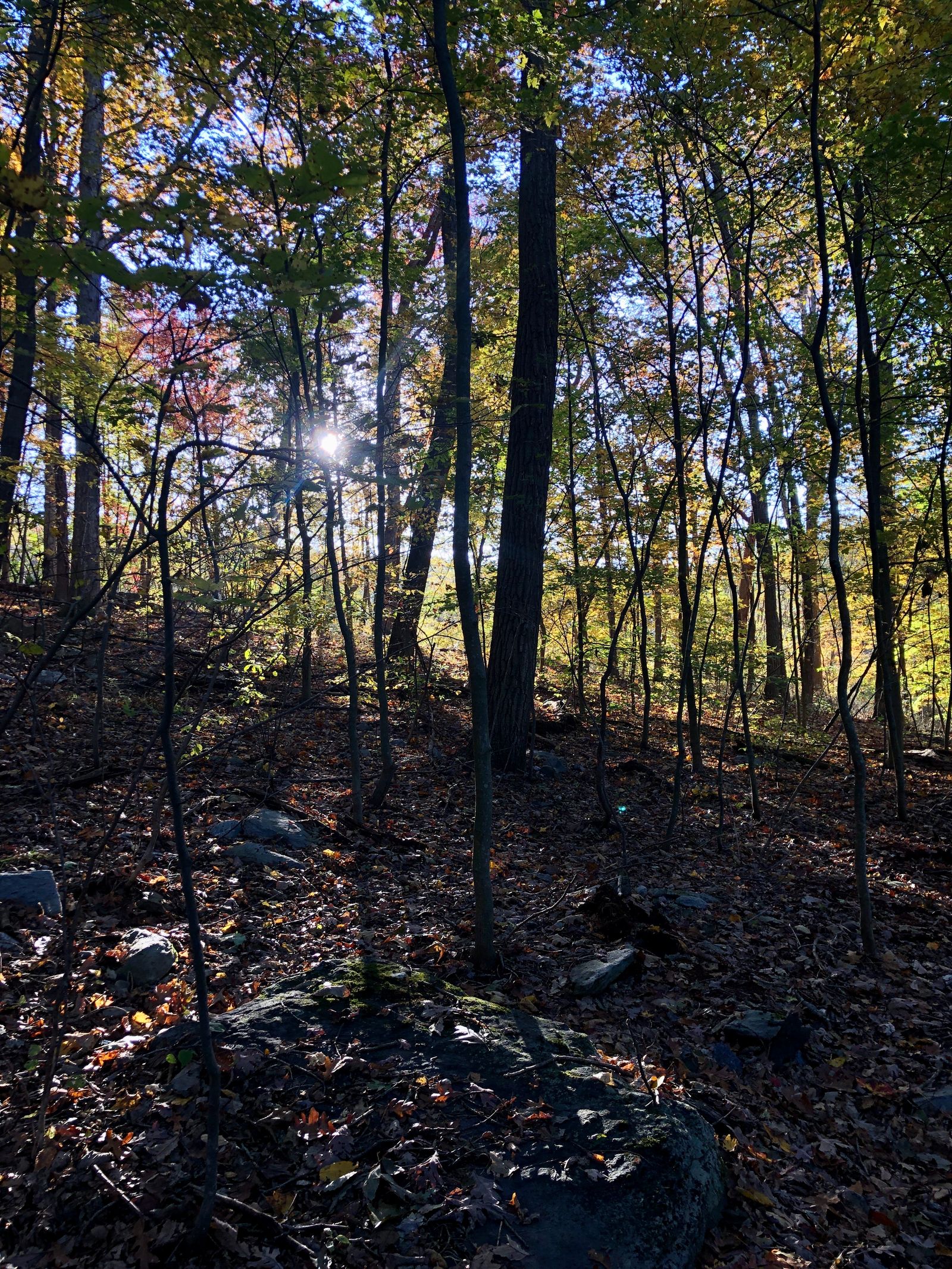 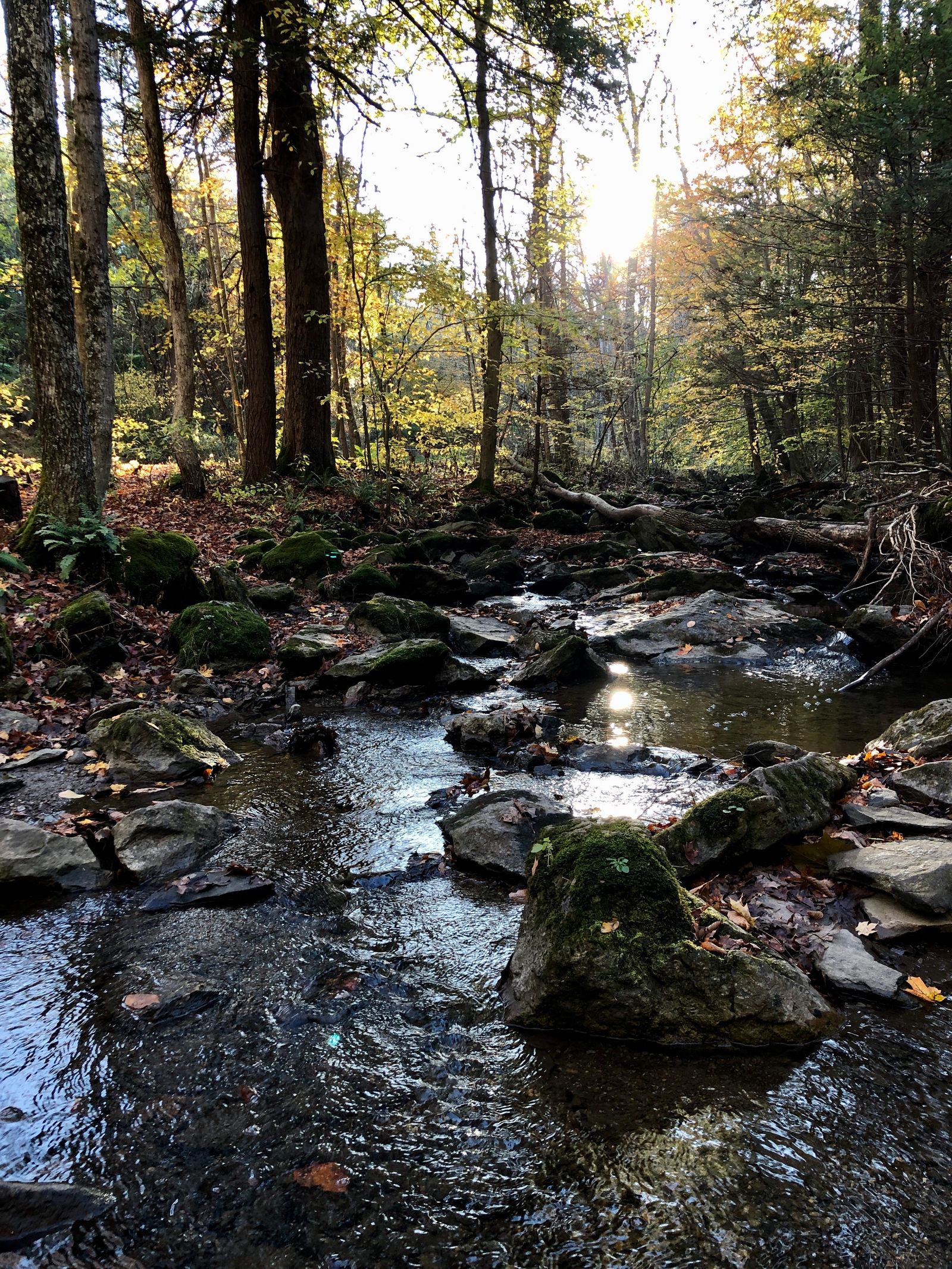 Next morning, Day 3, we continued south to our next camp - Rocky Run. On the way there we thought we’d stop at Dalghren to maybe take a shower, but because I’m a genius navigator, Hefty and I took a detour off the trail and ended up circling 2 miles off-course. NatGeo map on my Gaia GPS app wasn’t clear that there’s only one way to get to that camp. So we pushed on to Rocky Run. There we had a dinner at a nice new shelter. I wanted to experience what it’s like to sleep in one, and while it was roomy and nice, I prefer my tent, because it’s more cozy.
Once again, Chili was awesome with getting the fire going and we spent some time after dinner sitting around the fire, although WhyMe went to sleep early; old man was tired!
Food on the trail:
http://sergestuart.com/post/food-for-the-at-md-hike-october-2019
Next morning, Day 4, we hiked to our lunch point - Gathland State Park, where we had lunch and then had a nice treat after. I won’t tell you what it was, but it was a morale booster for sure! 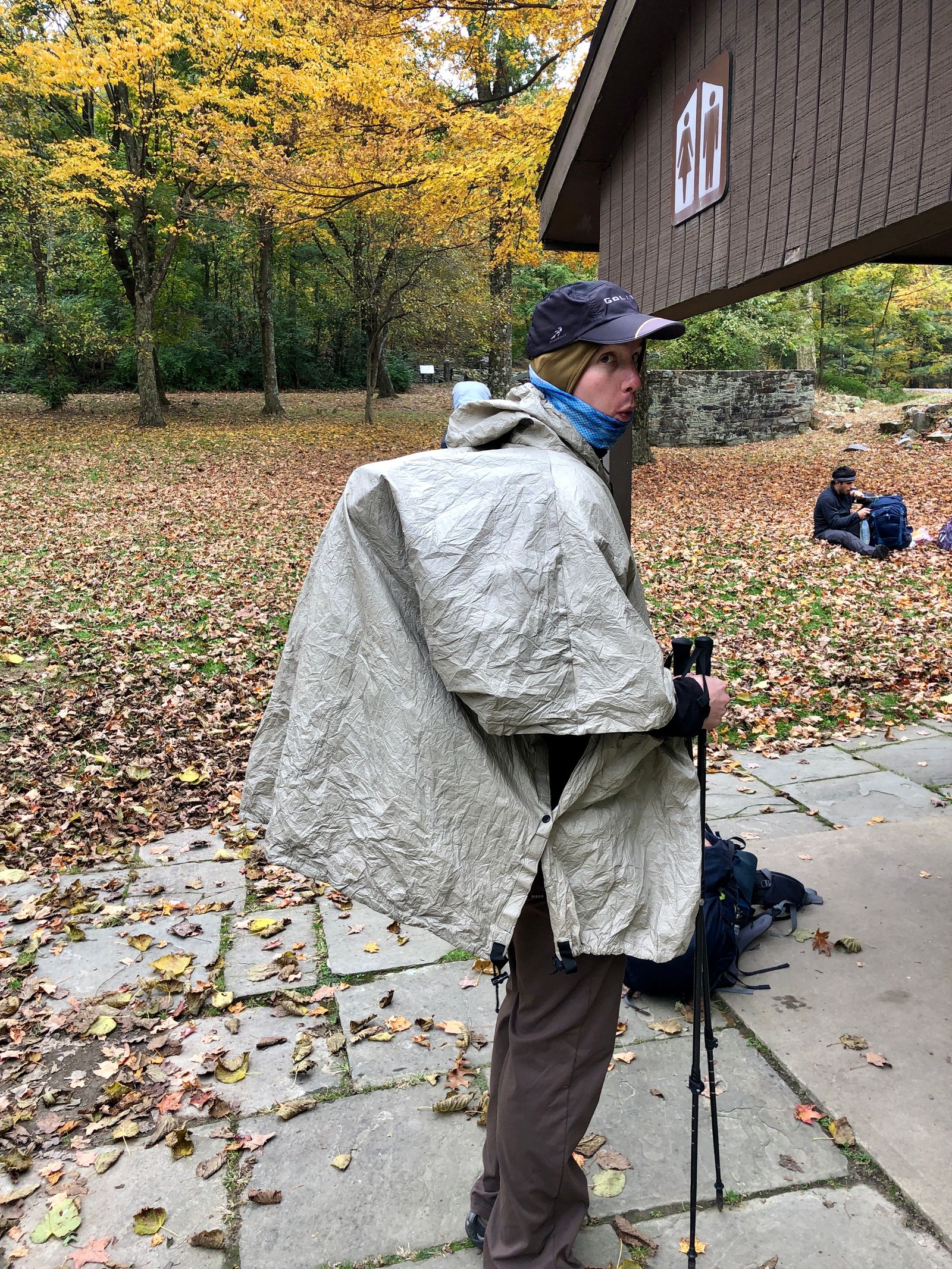 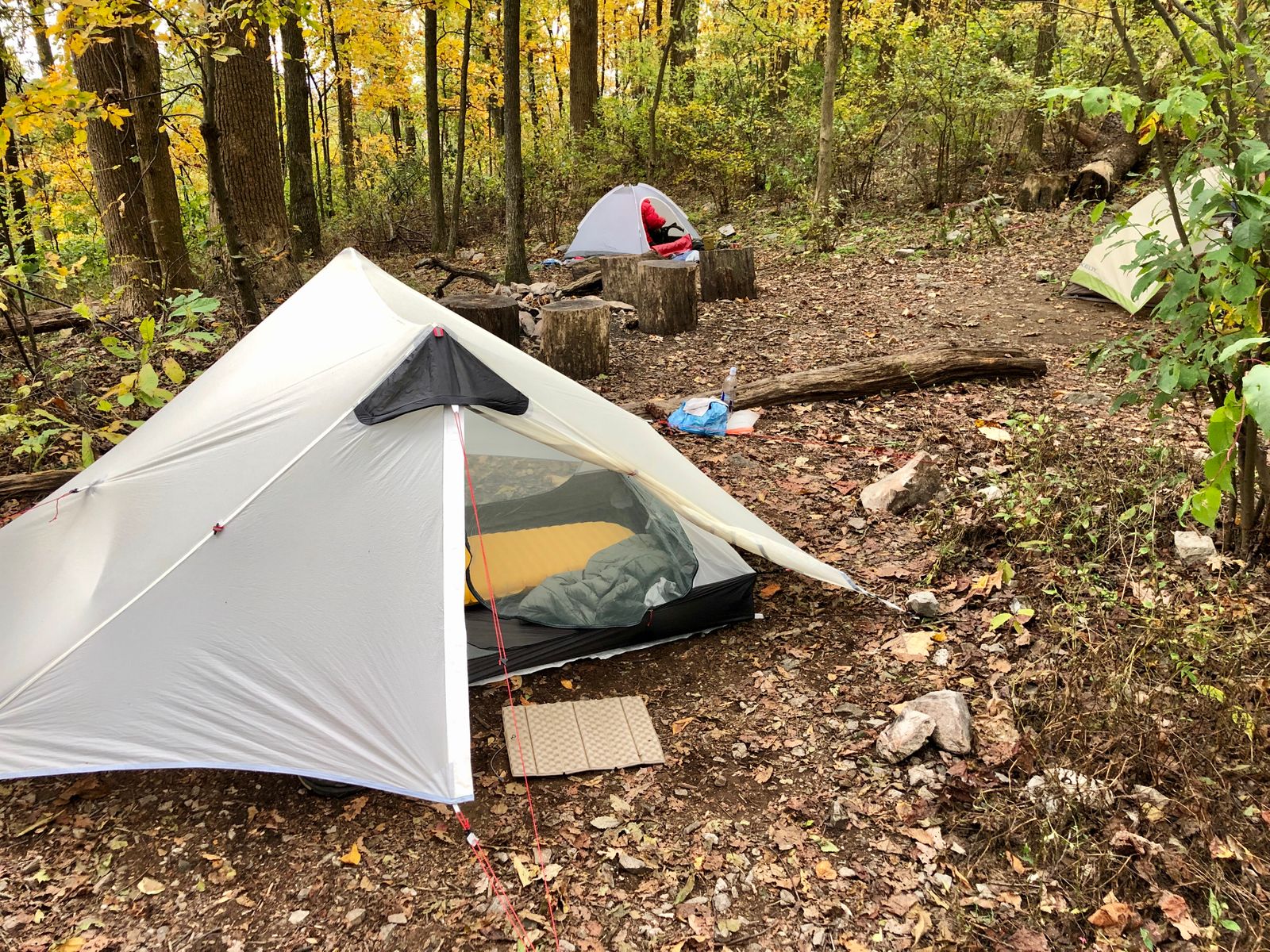 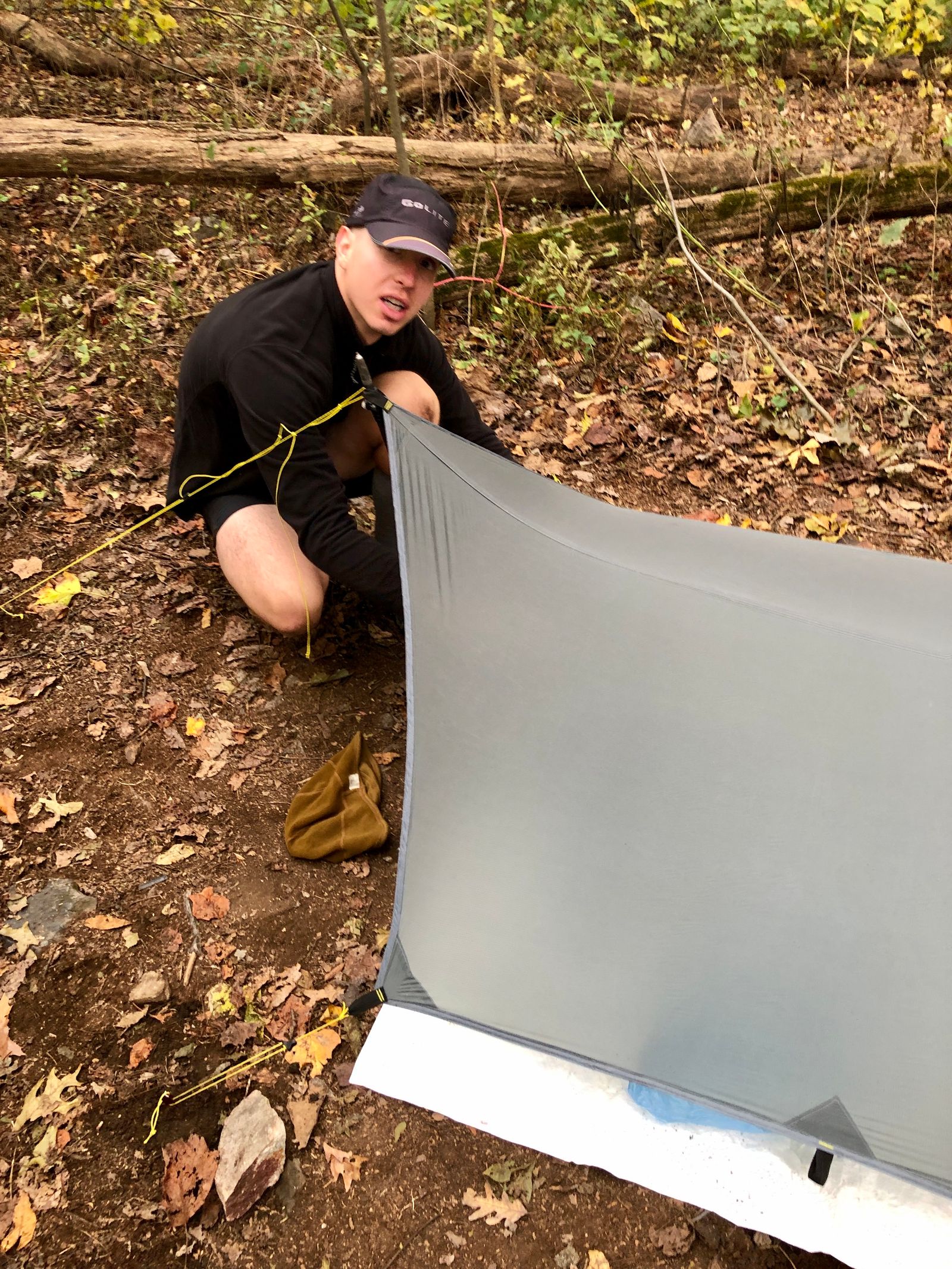 At Gathland, we met Fallout, a nuclear engineer who was hiking southbound by himself. Fallout tagged along with us to the last camp of the trip - Ed Garvey. Hefty and I were leading the group some distance ahead and Chili, WhyMe, and Fallout were closing up the rear. When we got to Ed Garvey, there were some people in the shelter and even though we knew it was going to rain overnight, three of us opted to sleep in our tents in a nice campsite not far from the shelter. WhyMe was smart and stayed at the shelter so that he wouldn’t have to pack up in the rain in the morning.
That evening was the best in my opinion. We sat around the fire, had dinner, and joked around, telling stories of college days and random awesomeness that tend to come up in these conversations.
Fallout turned out to be a great guy and a nice addition to our dysfunctional, insult-giving group. We went to sleep that night in a good mood. That’s what life on the trail was all about.
At night the rain started. Soft at first, then picking up intensity. Waking up in the middle of the night to go pee in the rain was not fun. Rain was hard and relentless; it continued through the night into the early hours of the morning.
We packed up our wet and muddy tents and met with WhyMe at the shelter. WhyMe didn’t have a great shelter experience there for reasons that I won’t go into here. But he was happy that he didn’t have to pack up in the rain. 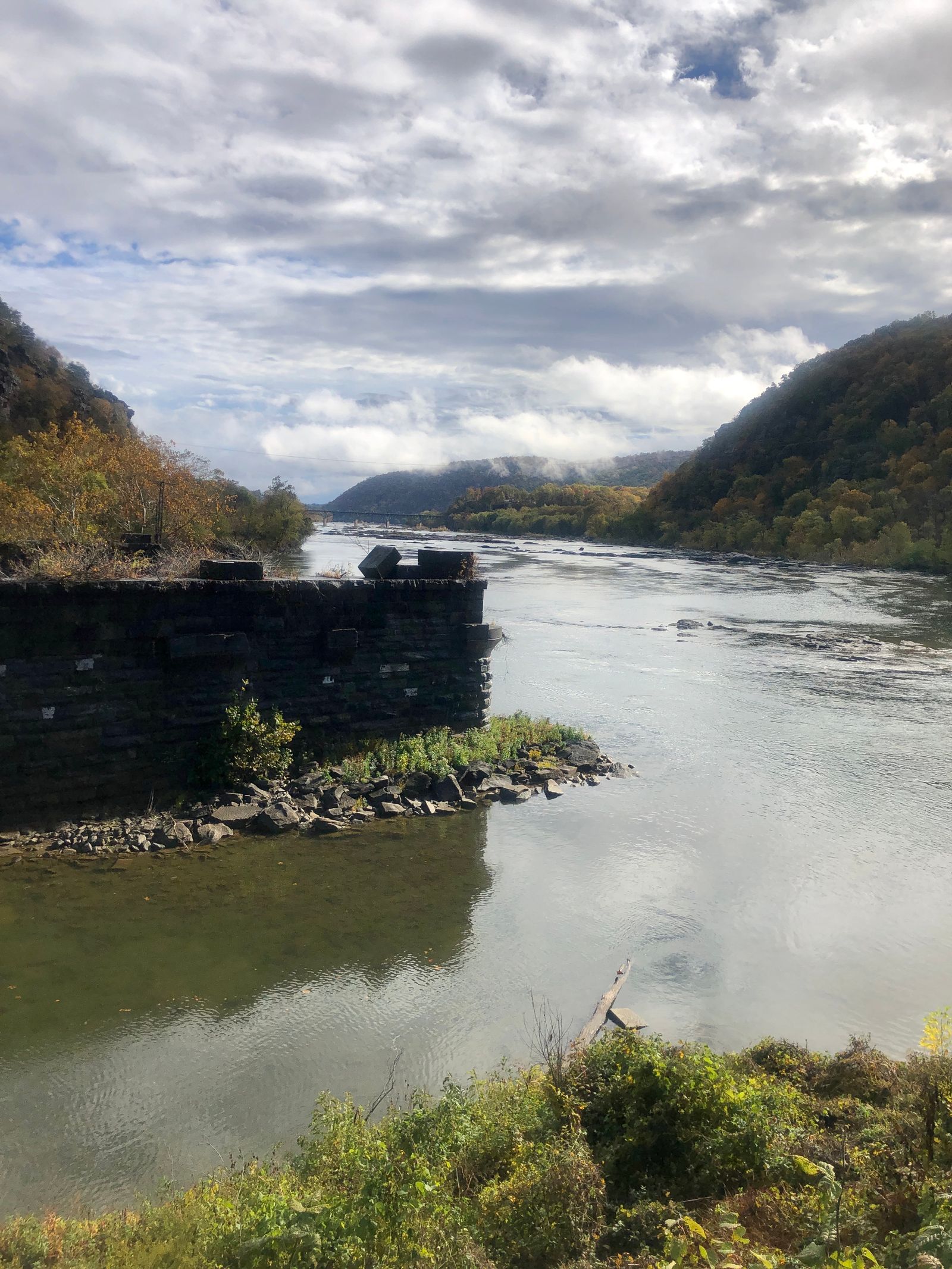 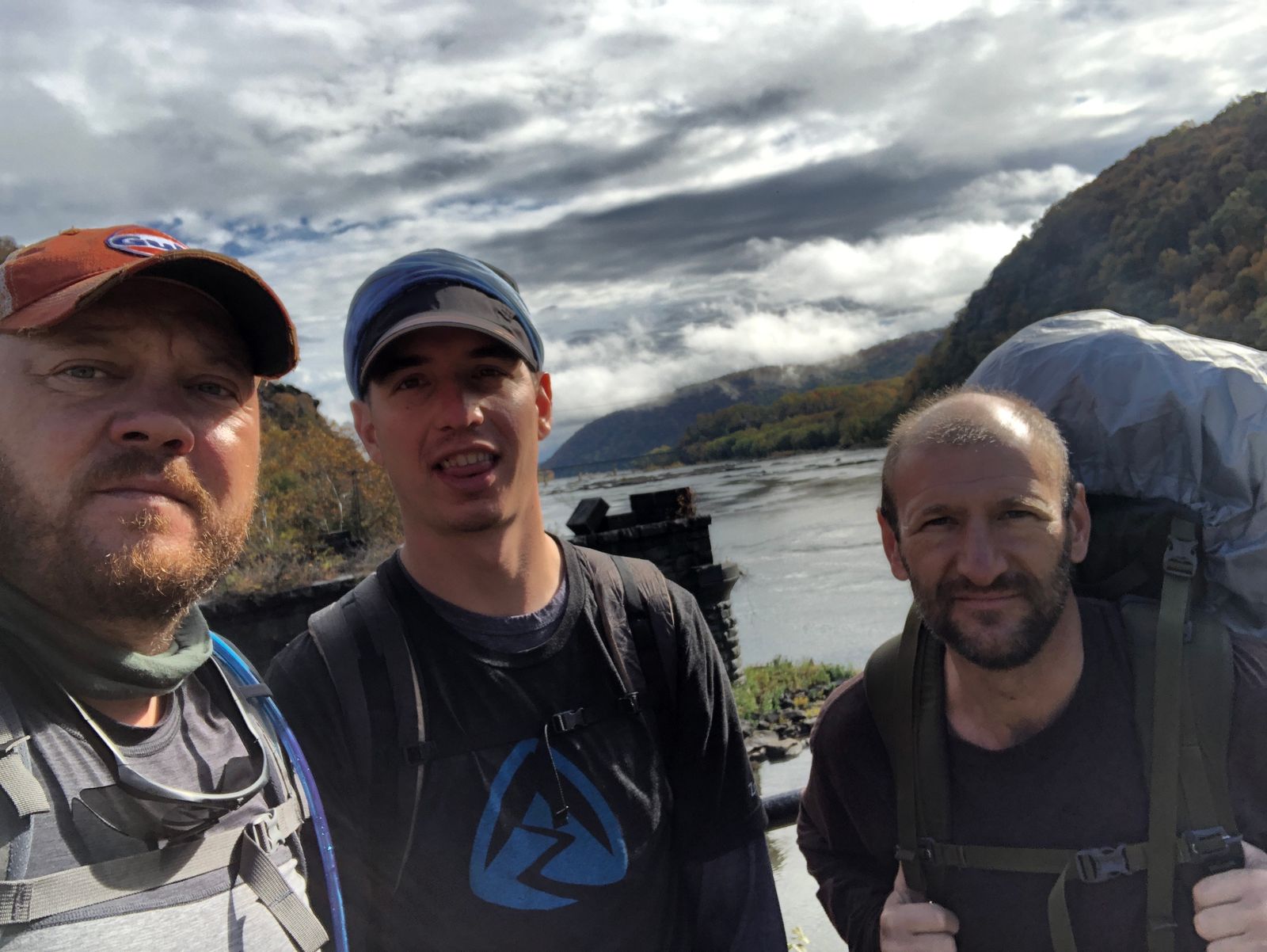 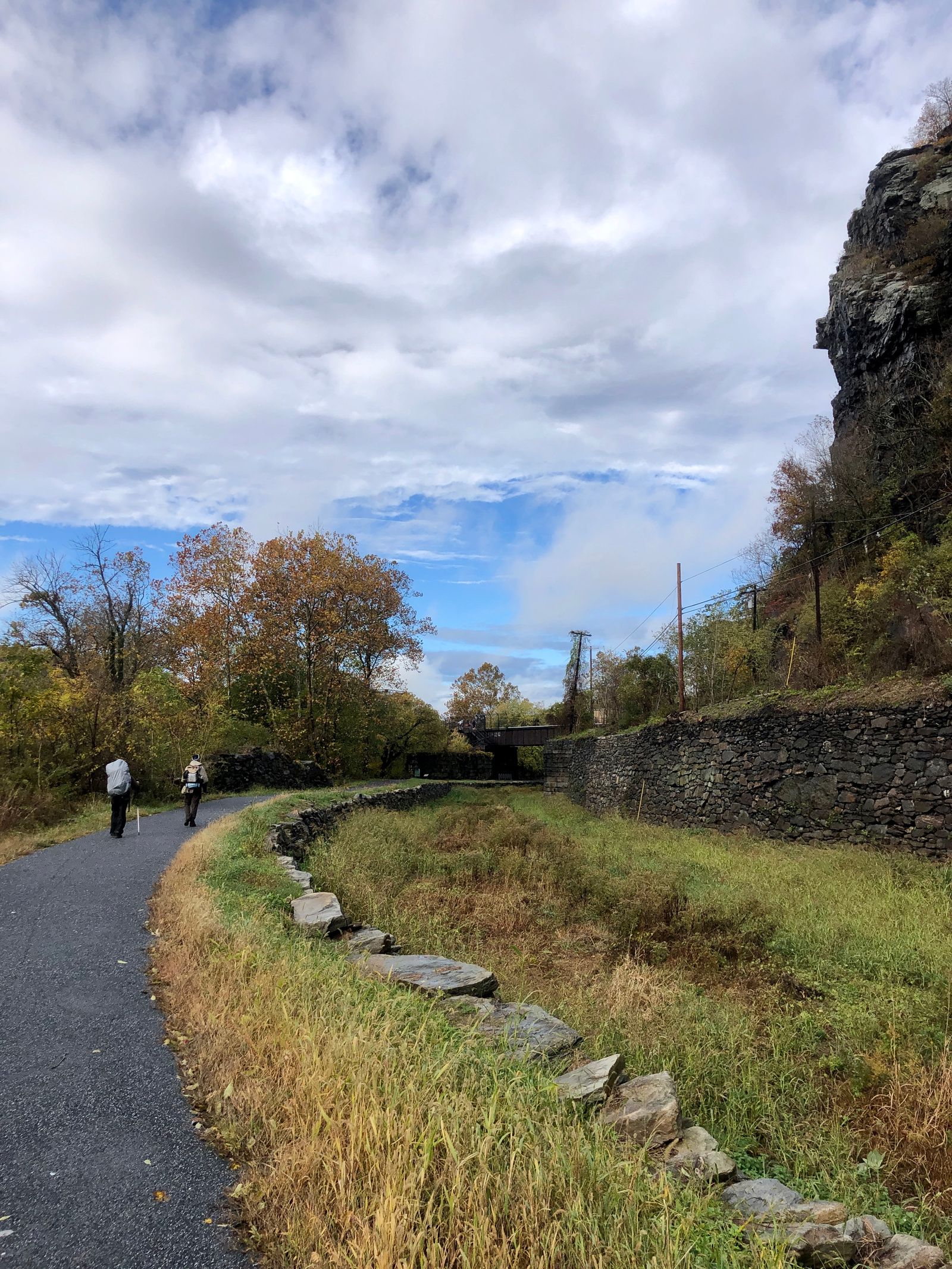 We set off and hiked in the rain for couple of hours, coming off the mountain range using slippery and rocky switchbacks.
In another hour or so we gloriously rolled into Harpers Ferry. The rain had stopped and the sun came out. It was truly magical. We started to dry out and found a great place to eat and have our beers. We ate and drank, looked at photos from the trip, and traded stories.
All was good - we completed our adventure. Nobody got injured and we accomplished our goal! 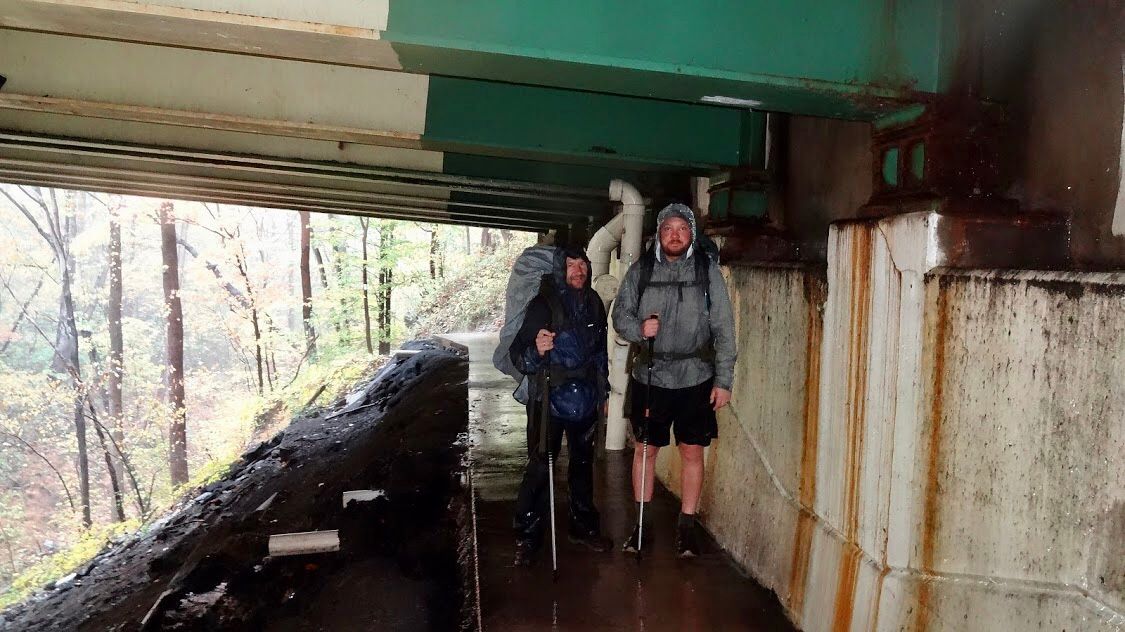 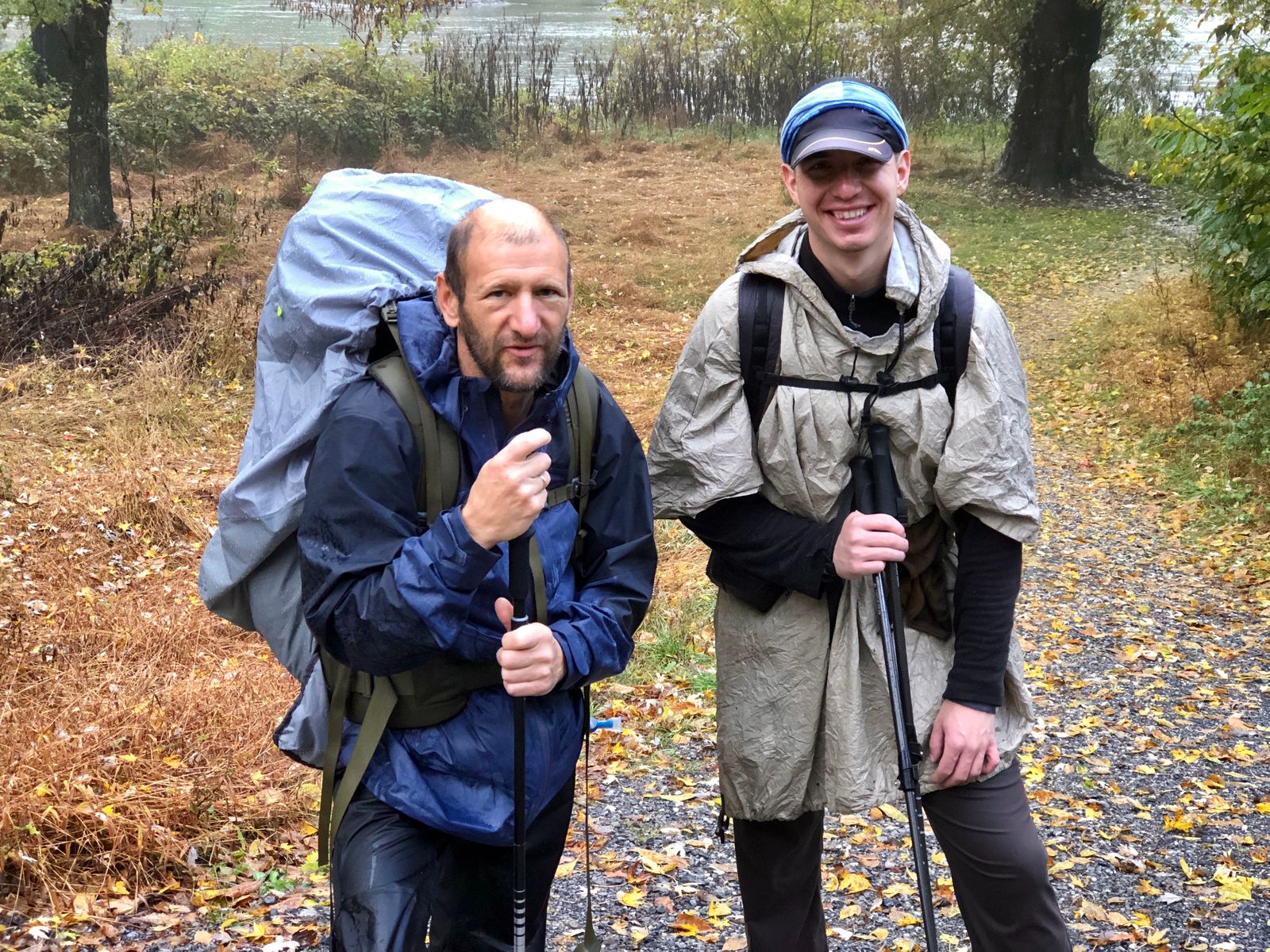 That experience was magical in some way that’s hard to explain. There’s something about being in the woods in the mountains that transforms people; it makes you forget about the everyday life and makes you think about bigger things.
Now that I have returned from this trip, it’s time to plan our next adventure. Drop a comment if you have any suggestions where we should go next! 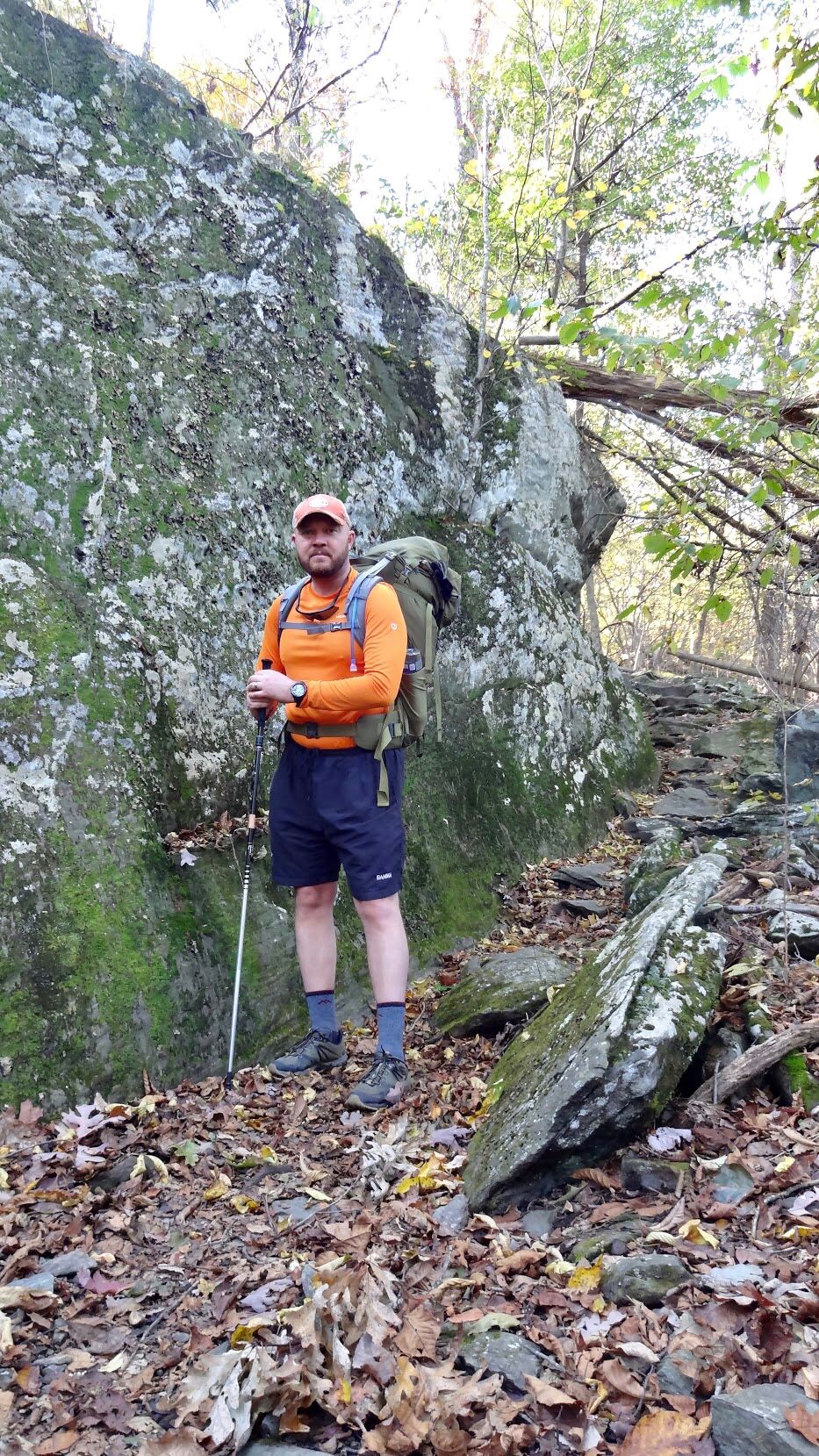 Bonus: Wow, you read all the way to here and for that you get 2 bonus items: how we got our trail names, and the gear I used.
Dan was named WhyMe because in our group this trip was the hardest on him. But he made it and we’re proud of him.
Alex was named Chili because he brought 5 heavy-ass cans of chili with him for his lunches. That was like 5 lbs of extra weight.
Vic was named Hefty because his ultralight backpack was like a trash bag, very light.
I was named LongLegs for having long legs, although I think my legs are average.
Gear I used:
http://sergestuart.com/post/gear-list-for-appalachian-trail-md-section-hike-october-2019
I wanted to mention the gear I used on this trip, for without it one would have a hard time on such adventure. Everything worked, just about. My tent sack did rip on Day 5 while I was packing it in the rain. I have since ordered a better sack for my tent.
Items that I brought and didn’t use were gaiters, compression pants, and bandana. The gaiters were not needed because the trail was wide enough that debris was not getting into my hiking shoes; compression pants were not needed because the temperatures never dropped below 40, and bandana was not used because I used my buff and small pack towel from my cook kit.
My "big 3" worked great: backpack was comfortable, sleeping bag and pad kept me warm, and tent didn’t leak. Everything else, such as cook system, water filtration, and clothing all worked as they should.
The End... for now ;)

Never miss another post!
Subscribe to my FREE Newsletter delivered via email.
No Spam | Powered by Feedburner